Your campaign logo is the linchpin of your election campaign’s branding efforts. It’s what appears on yard signs, brochures, direct mailings and your other campaign advertising. It’s an important design element – and it needs to be good!

Poor design will often prevent people from taking a candidate seriously. A good logo is simple and includes only the important elements, such as the candidate’s name and the elected state office that they seek. Political logos tend to be one or two solid colors, without shading or blending. A logo with too many colors and busy elements can be hard to read and may confuse voters.

Copying an existing state representative or state senator logo in its entirely is a bad idea. It can raise accusations of plagiarism and become an unnecessary distraction. Even though many political logo designs tend to have similar elements, be sure that you do not borrow your look from your opponent or anyone else who is running locally.

Keep it simple. Candidates for state representative or state senate positions use both serif and San-serif fonts. Script lettering is not recommended as it is harder to read and it may not translate well to print materials and yard signs. If you add additional elements, such as a state seal, prominent landmark, or the shape of the state, try to integrate into the overall look and not overwhelm the design.

Limit your colors. Candidates for state election go with all sorts of colors, from the traditional red, white and blue to black and white to greens and yellows and even the occasional purple. Odd colors may get attention, but a look that is too far out of the mainstream may cause disconnect with your message. 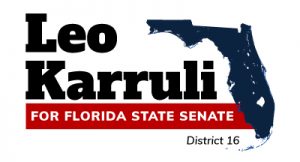 Know the rules. There may be state rules or laws that prohibit certain image elements and wording from appearing on your logo or signage. If necessary, seek professional guidance.

Stay consistent. Once you start promoting your campaign, don’t change your branding later. Much of your voter identity is tied into in your logo design and colors. If you change them, you’ll a lot of that identification, and it may be difficult to get that back before Election Day.

See all the political logo templates.

Who Can Design Your Logo?

Many medium to large campaigns hire professionals to create their logo and design. Sometimes a volunteer may create their logo early on with Photoshop or other graphic programs. Another alternative is that the local print shop creates the logo when the campaign produces their first print piece.

Regardless of who designs the logo, you will need a high-resolution version of it for print and large signs. Low-resolution files are fine for the web, but jpg files do not render well in offline promotion. Without a high-res file to use, you may need to recreate the design – and that may be difficult to do after the fact.

Online Candidate custom design website packages include a custom header, logo and color design. For print and signage, a high-res version of the designed logo is also provided – for FREE.